New eBook: "A Scientist Reflects on Life and Society" by Dr. Alexis Carrel 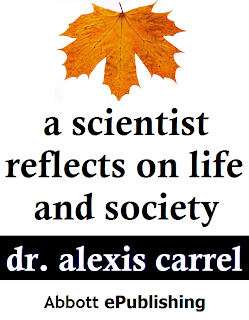 "A Scientist Reflects on Life and Society" by Dr. Alexis Carrel.

In this truly inspiring book, Dr. Alexis Carrel lays out his vision for the future, one in which everyone achieves their own destiny in a morally uplifting society that's designed to uplift the human spirit and nurture the human body.

He had everything going for him. He had a great job in Chicago in which his scientific genius was put to work with the likes of Charles Lindbergh, which he created the first heart profusion pump (artificial heart) in the early days of the 20th Century. He worked on amazing projects like keeping a chicken alive for decades by replacing and rejuvenating its cellular structure.

Using a small needle and very fine silk thread, he had developed the first successful technique for suturing blood vessels together, for which (along with his groundbreaking work on organ and blood transplantation) he won the 1912 Nobel prize in medicine.

But when World War Two broke out, he, being a patriotic Frenchman, returned to France. He returned to where he had grown up and, during World War One, had gone straight to the front lines, where he put his genius to work with Henry Dakin to create the Carrel-Dakin Method, an antiseptic treatment of wounds consisting of regular intermittent irrigation through surgically placed rubber tubes to avoid infection in contaminated wounds and to hasten healing.

He returned to France just before the German invasion and occupation of his homeland, and remained in the unoccupied southern part of France, where the government there was allowed to continue under the watchful eyes of the Germans, who ran the north and west of the country.

He returned again to France just before the German invasion and occupation of his homeland, and remained in the unoccupied southern part of France, where the government there was allowed to continue under the watchful eyes of the Germans, who ran the north and west of the country.

Carrel created a foundation there that would study human problems and seek solutions to them so society could advance and individuals could lead healthier, more productive (and happy) lives. After the war, he was, briefly, accused of collaborating with the Nazis (as was half of France) but was acquitted of all charges just before his death, brought on by stress, in 1944.

He was a man of great contradictions - a man of science who believed in the miracle cures of Lourdes, and a deeply devoted Catholic with morally conservative views who was devoted equally, perhaps, to science and dramatic change, if necessary, to advance society and preserve the human race. He had just finished a work encompassing all of these contradictions when he died.

In the early 1950s, his wife Anne had his unedited and unfinished work published as "Reflections on Life." This 2011 edition, titled "A Scientist Reflects on Life and Society," is that work, and it is perhaps one of the most beautifully written testimonies to the determination of the human race to survive and thrive ever written.

Out of print for decades, this newly-edited work will surely have an impact in today's conflicted and troubled world.

Read more and buy this wonderful book for only $3.99 at http://www.abbottepub.com/carrel.html