NEW eBook: The Prophesies of Madame Mary Ordana for 2010 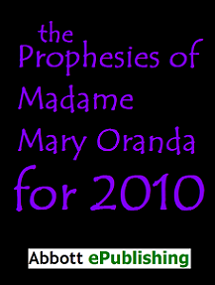 The Prophesies of Madame Mary Ordana for 2010 is one of the most peculiar and interesting eBooks Abbott ePublishing has seen. If features predictions about:
* Earthquakes in the Carribbean, as well as the Atlantic and Pacific Oceans
* Political changes
* Deaths of world leaders
* Missing children
* Career-ending scandals
It's all here, and all predicted by a mysterious Carribbean woman trained in the art of Vodoun and eager to share her gifts of prophesy and insight with the world.
Abbott ePublishing rushed this book into print before these startling prophesies started coming true!
This is perhaps the most detailed book of prophesies you will ever read, and unlike any other collection of prophesies, for Madame Ordana's beautifully written stanzas - many of them in rhyme, will stand or fall on their very obviousness and clarity. But they are so beautifully written, in fact, that many will enjoy them for their beauty alone.
WE WANT THIS eBOOK TO SELL WELL. So we're offering this beautiful eBook in pdf format for just $1!! That's ONE DOLLAR!
Offered in Adobe .pdf format. Kindle-ready, readable on most handheld devices, on laptops and desktops, and on the downloadable Adobe Reader.
Abbott ePublishing is a Manchester, New Hampshire-based publisher of interesting, affordable electronic books. They can be found online at abbottepub.com.
Posted by Stephen at 3:07 PM No comments: 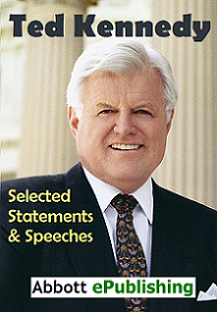 Learn more and buy here: http://www.abbottepub.com/tedkennedy.html
Posted by Stephen at 11:25 PM No comments: 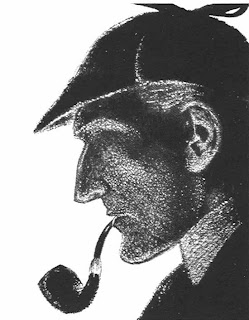 Did you love the new Sherlock Holmes film? Hate it? Think you could have done better yourself? Now’s your chance! Abbott ePublishing - the premier electronic publishing house online for interesting, affordable eBooks - is seeking entries for Sherlock Holmes Fan Flash Fiction stories for a new anthology.

These should be new mysteries and fiction based on the beloved Sir Arthur Conan Doyle character, each from 50 to 1,000 words each. They can be new mysteries, fiction, explorations of the characters in the Doyle books, letters or diary entries of Holmes, Watson or any other characters in the stories, including villains!
Your stories can be set in any time or in their original time period. They can be set any place in the world - or in the universe.
We will be accepting entries immediately and will cut off submissions when we have received 50 winning entries and will publish this anthology immediately.

Send submissions to publisher@abbottepublishing AS TEXT WITHIN THE BODY OF THE EMAIL. No attachments, please. Do not forget to include your name and location for attribution.

While there is no compensation for submissions, exceptional entries may be singled out to be expanded for publication as full-length eBooks with Abbott ePublishing. As an Abbott ePublishing author, you will receive royalties for every eBook sold.

The Game is Afoot! Good luck!
Posted by Stephen at 3:42 PM 2 comments: