Did #Christ Return To Earth In the 1990s as a Chinese Woman?

An Obscure Chinese Religion Believes IT'S TRUE!
The Chinese-based religion "Eastern Lightning" teaches that in the 1990s, Jesus Christ  returned to Earth - as a Chinese woman in her 30s named Yang Xiangbin (photo on the left - the only image known to exist.)

This controversial "cult" has been vigorously persecuted by the Communist Chinese government, which labeled it "subversive," and Christian missionaries in China and throughout Asia have also labeled it as "dangerous," not just for its aggressive tactics and alleged criminal behavior, but because its teachings vary from Christian "orthodox" teachings.

For example, Lightning from the East (or "Eastern Lightning," also known as "The Church of the Almighty God") believes that in the Old Testament, God was "Jehovah," while in the New Testament, this same God was known as Jesus. But in this age, Yang Xiangbin has become the third incarnation of God, the "Almighty God."

You will ALSO read about:

This amazing book is 80 pages in length (.pdf format) with a full introduction.

Click HERE to learn more and buy this AMAZING eBook! 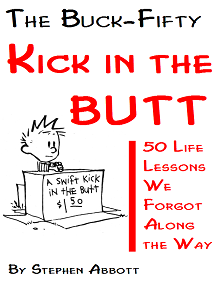 It's BACK!  After a six month absence, Abbott ePublishing is reintroducing, by popular demand, the Buck-Fifty Kick in the BUTT! The book that offers real, practical advice for getting the MOST out of your life!

For More go to: Abbott ePublishing's "Buck-Fifty Kick in the Butt"
Posted by Stephen at 10:26 AM No comments: