The REAL (and inexpensive) secret to RICHES!

Are you tired of buying into online scams?

Are you ready to start your own Business That Can Make you RICH? 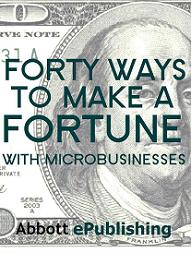 Forty Ways to Make a FORTUNE with MicroBusinesses is an eBook that can give you a QUICK start on FORTY incredible business opportunities that YOU CAN START TODAY - ON YOUR OWN, without partners, without "downlines" without buying $500 "starter kits" or any other scams.

With Forty Ways, you will learn:

This program is short, easy and best of all AFFORDABLE!

Act NOW and you could be starting your own business in just HOURS!
Just visit http://www.abbottepub.com/inbiz.html to order your copy NOW! It will be sent to your electronically in less than 24 hours, and you will be ON YOUR WAY TO ENTREPRENEURIAL SUCCESS!


DON'T LET THIS OPPORTUNITY SLIP AWAY!
Posted by Stephen at 4:37 PM No comments:

A selection from the Abbott ePublishing Tyndale21 Version of the Gospels (John 15:12-17)

"This is my commandment, That you love one another, as I have loved you. No man has greater love than this: that a man give his life for his friends. You are my friends, if you do whatever I command you.From now on I will not call you servants, because the servant does not know what his master does. But I have called you friends, because all things that I have heard from my Father I have opened to you. You have not chosen me, but I have chosen you, and ordained you, so you would go and produce fruit, and that your fruit would remain, so whatever you ask from the Father in my name, he would give it you. These things I command you, that you love one another."

John 15:12-17 from the Abbott ePublishing Tyndale21 Version of the Gospels (more here)

The Beatitudes in the Abbott ePublishing Tyndale21 Version of the Gospels

"Buck-Fifty Kick in the Butt" eBook to be Discontinued SOON! 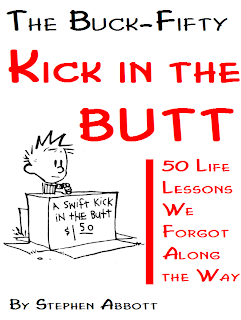 Abbott ePublishing has decided to discontinue and "retire" the "Buck-Fifty Kick in the Butt" eBook after selling a final 50 copies in early July.
Why?
Because the lessons here, while EXCELLENT, need to be treasured and valued, and because we have reached so many already and changed so many lives, it's time to put this treasure away and bring it out again only when the market requires it.
WHY IS THIS SUCH AN INCREDIBLE LITTLE BOOK?
Often, life can seem like it’s kicking you in the butt all the time. Whether it’s financial trouble, dissatisfaction at work, or a struggle with personal demons, it’s easy to throw up our hands and say “Why Me?”

It’s easy, but it’s wrong. There are simple life lessons that, when applied to our lives, make things run smoother, and enable us to withstand life’s “kicks.”

And ironically, kicking OURSELVES in the butt can often be the first step towards getting the world’s problems off our backs.

Once you possess it, you will have a set of principles and guideposts that few other people have ever learned. That will give you an edge, and allow you to survive and thrive.

Get it NOW - and start getting things RIGHT again!
Buy it HERE before it's TOO LATE! http://www.abbottepub.com/150kick.html
Posted by Stephen at 2:11 PM No comments: